A clear outcome of the coronavirus crisis so far is the collective ability of societies to respond to imminent threats to life by swiftly deciding radical strategies and even shutting economic activity. Another remarkable observation is that when it comes to matters of life and death, science and the opinion of experts are revered as lifesavers. Hopefully, these will be lessons learnt in addressing the climate crisis and all the pressing environmental challenges.

National and global responses to crises, such as the unfolding COVID-19 pandemic, often entail trade-offs between public interests competing for collective action, political attention and funds. Combating the climate crisis, safeguarding fundamental human rights and democratic freedoms, workers’ rights, or the battle against poverty may become side-lined in the face of the urgent need to save lives and stop the virus from spreading.

While no prediction is easy, especially when considering the magnitude of the threat and the loss of hundreds of thousands of people, it is necessary to imagine the post-pandemic future and make some first estimates of the world's environmental fate, especially since some trends and data are already given.

During the lockdown, Greece saw a number of serious environmental setbacks.

In these days of global concern over the health crisis, the planet appears a bit more calm than usual.

In March, many European cities saw a significant reduction in concentrations of air pollutants. In the centres of Athens and Thessaloniki a sharp drop by 31.36% and 23.45% respectively was recorded in the concentrations of nitrogen dioxide. The issue of air pollution however has always been rather foggy in Greece, as the data published by the Ministry of Environment and Energy, in the context of the EU’s air quality policy, are scandalously incomplete over the years, making it difficult to inform public opinion on this important environmental and health issue.

In terms of energy consumption, electricity demand fell by 9.8% in April 2020, compared to April 2019. Nevertheless, the scenario of a return to demand as usual levels is quite possible upon recovery of economic activity.

However, the historically low level of lignite production is quite an issue, especially as it continues  the downward trend of recent years. In April 2020 the decrease in lignite production reached 62.7% compared to last year’s. Fossil fuels now on their way out, the main environmental challenge is the efficient, ecologically sound and socially just development of renewable energy sources.

In the midst of the pandemic crisis, the bar for ecological and socially just development has risen even higher, as the very survival of human societies is now at stake. Along the path to sustainability, guided by the global sustainable development goals, we can briefly map the effect of the pandemic of COVID-19 in Greece as follows: 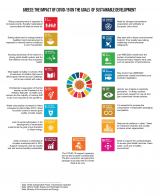 In April 2020, the UN Special Rapporteur on human rights and the environment issued an urgent appeal, calling on governments to avoid using the COVID-19 pandemic as an excuse to weaken environmental protection and enforcement. This call came after several governments announced plans to lower environmental standards and protective regulations, claiming such a rollback would be necessary in rebooting their depressed economies.

In Greece, the first landmark of the government of New Democracy's environmental policy, namely the announcement of September 2019 by PM Kyriakos Mitsotakis that Greece is on a path to rapid lignite phase-out, was rightly applauded internationally as “a historic milestone in Europe’s path to become coal-free by 2030″. This breakthrough statement was followed by the National Energy and Climate Plan (NECP), which was approved in December 2019, and was clearly more ambitious than the first draft of 2018.

Then came the pandemic lockdown. Within a month and a half of the restrictive measures, Greece saw a very clear trend of deregulation and loss of important environmental acquis.

The bells of environmental rollback started tolling upon the submission to Parliament of a bill by the title “Modenisation of environmental legislation”. Voted on May 5 as Law 4685/2020, this legislative initiative understandably sparked massive public outcry, as it:

Following suit from the 4685/2020 environmental deregulation law, a new bill on tourism investments was submitted to Parliament on May 15. Voted within just a week as Law 4688/2020, it allows tourism businesses to further expand along the coastal and littoral zone and restricts public access to non-customers of the hotels, beach bars and other tourism businesses. It also eases the sanctions against illegal developers of beaches and the banks of rivers and lakes.

In the economic policy domain, the first round of measures announced by the Government in support to businesses affected by the crisis seems to largely ignore the need for public investment policies to show the private sector and markets the path to environmental sustainability and climate neutrality. The plan does however state that the upcoming Strategic Plan for Economic Development will indeed pursue a “Direction towards net-zero carbon and circular economy”. In the meantime, the government has made it clear that it intends to offer life-saving bailout to industries with huge environmental footprint, such as Energean Oil & Gas for reduced production in the Prinos offshore oil drilling concession. While in other EU countries the rescue of high-footprint industries is tied to conditionality for climate action, in Greece such policies are far from obvious.

Obsessed with oil and gas

Despite the collapse of the global oil industry, the current government continues to pursue the environmentally perilous hydrocarbon-friendly policies of previous governments. This Greek obsession makes absolutely no sense, especially as the long-time king of the energy markets, i.e. oil, has now been dethroned. COVID-19 has accelerated the ascension of renewables to the lead of the energy markets.

According to the recent International Energy Agency report, reduced energy consumption has uplifted the share of renewables in the electricity supply, since their output remains largely unaffected by demand. The COVID-19 crisis has affected all other electricity sources, including coal, oil and gas and, of course, nuclear power.

The petroleum companies which operate in Greece on nearly 75,000 square kilometres of land and sea for oil and gas extraction have already announced significant losses and cuts in their investment programs, while many of them have pledged to climate neutrality by 2050.

Greek politics appear oblivious to the gloomy outlook of the oil and gas industry. Although the oil industry finds itself in an increasingly difficult position, due to its catastrophic climate and ecological footprint, in Greece the myth of black gold as a strong asset in the geopolitical equation still enjoys cross-party political support. Hence, during the lockdown, the Environment and Energy Ministry recently extended its pro-oil and gas policy to protected areas. According to article 44 of Law 4685/2020, oil and gas drilling is one of the admissible land uses within Natura 2000 sites. The same law also grants oil companies the right to use municipal and other public lands for research without any authorisation, approval or local consent.

Making the crisis an opportunity for environmental innovation

In the decade of austerity and bailout programmes, Greece has seen sweeping changes in its environmental laws and policies. The pretext is always the same: Greece must become an investment-friendly country. In the end, is it possible that Greece's development problems have nothing to do with the stringency of environmental policies, but with the instability of the institutional framework, mismanagement, lack of controls and the refusal to admit that some investment plans with a heavy impact on nature and climate must eventually be scrapped?

The COVID-19 crisis has severely hit Greece’s economy, just as it had started recovering from the deep austerity imposed by its international creditors, while at the same time struggling to cope with the escalating number of refugees fleeing from regions devastated by war, economic deprivation and climate disasters. The pandemic has undoubtedly worsened Greece’s prospects for environmentally sustainable recovery from the prolonged austerity and it will take more than visionary words to refocus the economy towards environmental sustainability and climate neutrality.

The European Commission's proposal for a massive “Repair and Prepare for the Next Generation” recovery package is an opportunity for countries lagging behind in environmental innovation, such as Greece, to turn the pandemic into an opportunity to reorient their economic pathways towards sustainability and increased resilience to the climate crisis. Placing the EU Green Deal at the centre of the recovery, while also stressing that public investments in the recovery should respect the green oath to “do no harm", the recovery package should provide an excellent financial environment for Greece’s rapid and smart transition away from fossil fuels, towards climate and ecologically safe innovation. Now is the time to develop a deep environmental democracy and climate justice.

The pandemic crisis is a dramatic proof that public policies protecting the environment and people need to be based on solid science and not clientelist politics serving the business as usual status quo. The political perception that nature is a resource for over-exploitation is outdated and catastrophic. Environmental protection is a matter of life and death.

This article is part of the dossier  "COVID-19. Political debates on the pandemic with a European focus".