Impact of Lignite on the environment

The operation of lignite-fired plants also has a very significant footprint on the water resources, used for cooling. In Western Macedonia, PPC pumps from the river Aliakmon and Polyfytos lake 72 million cubic metres of water annually, at a 60 km distance and 390 m elevation difference. For the purpose of comparison, the water supply needs of the 300,000 inhabitants of the region are met with 43 million cubic metres. There has also been considerable deterioration in water quality in the region as a result of pollutant loads (e.g. heavy metals), as well as a drastic lowering of the water table in the vicinity of the mines in Ptolemaida. 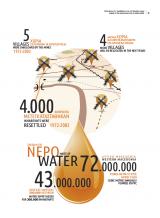 One more considerable negative aspect of the extracting activities of PPC in Western Macedonia is the forced relocation of several villages, with major economic, social, cultural, spatial and technical consequences. From 1972 to 2003, almost 4,000 inhabitants were resettled, after their 5 villages were swallowed up by the mine extensions. At present, the relocation of an additional 4 villages is either underway or has been decided.