Together with the Goethe Institute Thessaloniki we did a public screening of the movie “Citizen of Moria” and took our audience on a journey to Europe’s most notorious refugee camp. In a personal interview the filmmaker and protagonist  Ahmad Ebrahimi talks about the struggle of being forced to flee in search for protection.

Thanks to the Goethe Institute Thessaloniki we had the pleasure to host our first physical event after a long COVID-induced break, in their beautiful garden. Our joint film-screening of the award-winning documentary was well visited. We had a broad range of visitors: Civil Society representatives working in the field of migration, students but also the German Consul General Mrs. Sibylla Bendig honored us with their visit and joined us for the screening of this very moving film.

The story of Ahmad Ebrahimi, an Afghan filmmaker who after serious threats from the Taliban leaves his family behind to survive and who ends up in Europe's most notorious refugee camp, Moria on Lesbos, where he hopes to find asylum is an excellent time document for the state of today’s EU migration policy and its failures. Hence, it was a great occasion to introduce the local community here in Thessaloniki to our new regional programme on migration, with which we aim to work on exactly these issues. But “Citizen of Moria” is also a human story that reminds us of the universal values of humankind and the power of art and real friendship and solidarity. 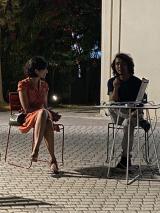 We had the honour to conduct an interview with the film-maker and protagonist Ahmad Ebrahimi.

Neda Noraie-Kia: How are you today? How is your current situation?

Ahmad Ebrahimi: Thank you so much, I’m fine busy with work, producing movies. I live in Athens now. I got my refugee status, but I’ve been waiting for my ID card (resident permit) for over 10 months now.

What does it mean to be an accepted refugee in Greece?

When you apply for asylum you receive 90 Euros per month, you can probably stay in a housing project or a camp. When you are accepted as a refugee, or you have a subsidiary protection status you don’t receive anything anymore. There is the Helios programme that gives additional support for 6 months, a little money for rents and language classes. After 6 months this ends end you are completely on your own. The problem is, that many very talented people cannot work because of the Greek bureaucracy or due to language barriers. I know people who are great graphic designers or talented mechanics, they could work here, but don’t.

Let’s talk about the film, “Citizen of Moria”: What made you decide to do this movie?

I’m a filmmaker, I wanted to make something. I saw many journalists coming to the camp for a short time, trying to cover the situation there. But like an elephant in the dark night, everyone was just touching parts of it, no one got the whole picture.

When Jawad called and asked me if I would do this kind of movie, I could have said “no”, I had a lot of distress; I was even depressed at that time. But then I thought maybe this movie won’t change my life and my situation, but we can show the bigger picture, we could document history. The movie lives forever, art does. With the movie people will also know about the camp in the future.

How did you manage to film inside Europe’s most notorious refugee camp?

It was a little bit challenging. Most of the time people didn’t want to be filmed, even when I was filming myself people thought I might film them and sometimes shouted at me to stop, which of course is their right to. In addition, it’s very difficult to film yourself. However, for journalists it is super difficult to film inside Moria camp, but not for. The police cannot prevent us from filming because we are living there. We are the residents of the camp.

There’s a scene in a film when you are doing film-workshops and you say “I used to do these kind of workshops in Afghanistan, when I do them in the camp I feel at home”. Can you tell us a little bit about your work and what it meant to you?

We did filming workshops in Afghanistan. I was working at TV stations in Afghanistan. I learned everything about filmmaking by a friend and we started teaching young students and found a Cinematic Group because we knew that many young people were interested in filmmaking and searching for an opportunity, so we would make these workshops in the camp. I would like to continue this kind of work in the future. The workshops in Moria meant a lot to me: In the middle of nowhere where people don’t have anything I could give them something which they can maybe use it one day in their life. It was very good for myself, because I was doing something, not just waiting inside the camp.

How do you assess the current situation and the recent developments in Afghanistan?

The situation is not good. Everyday new terrorist attacks happen. They are killing people every day. The government released 5000 Taleban few months ago, only a while ago they killed 85 kids in a terrorist attack just in my neighborhood.

I’m afraid for my kid's life. When something happens in Afghanistan I just go crazy. I keep calling and asking if everyone is ok. And even if they are ok, it’s hundreds who died.

15 minutes from Kabul is my village where my mother in law still lives. You cannot go there anymore. The Taliban took over, when they know you worked with foreigners they will kill you. The government doesn’t do anything anymore. They called the Taliban the brothers. Too many innocent people got killed at wedding ceremonies, in schools, in mosqes. They are killing their own people. I don’t think the foreign troops will completely leave, however, with less troops the Taliban will gain more power.

Do you think there will be more people forced to flee Afghanistan?

Yes, of course. Everyone is afraid of the current situation. I receive a lot of messages from friends or relatives who are afraid and ask me about Europe and I tell them the real situation then.

What is the real situation?

When you try to cross the sea the Greek Coast Guards will push you back to Turkish waters, even when you reach Greek islands the police can catch you and put you back in your own broken boat and send you back to Turkey. They don’t care if you drown or not. When you arrive you will live in Moria camp without access to water, internet, proper food and you don’t know how long you will have to be there and this will drive you crazy. There are COVID measures, even if there is no lockdown on the islands of Lesbos anymore the people in the camp live in a lockdown and can only leave the camp once a week. Also the Greek government treats Turkey as a save country now. Afghan nationals will be interviewed and send back to Turkey. If you make it to Greece you will be stuck forever. I’ve been waiting for my ID card for 10 months, I know it’s ready I just cannot get it. There is a lot of intranspareny and corruption. Some people pick up their ID cards and it’s already expired.

The Moria camp of your movie burned down in September last year. There is a new camp called “Kara Tepe”, referred to as "Moria 2.0" by some. Do you know the new camp?

Yes, I haven’t been there but I know the area where it was built well. It’s worse than the old Moria, the new one is close to the sea, super cold in the winter and very hot in summer. The old camp used to have at least some trees around to protect from wind and weather.

Why do you think the new camp is like this?

There are different answers to this question: There are many empty houses in Mytilene where refugees could live. At the same time there is pressure from Europe, that people should not leave the islands and that Greece should prevent them from continuing their journey.

What could improve the situation?

Everybody knows that Europe is supporting wars. People should be free to go wherever they want. Borders are so … during Corona Time I thought that now people understand what it meant for us to be locked on the island. I don’t think they realise…. but now they maybe understand how it feels to be deprived of freedom.