Lignite has been the backbone of Greece’s electricity system for many decades, offering affordable energy for the country’s economic growth. However, it is now urgent for the country to consider its gradual and planned transition to the post-lignite era for a number of reasons, including: 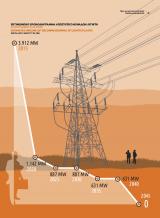 Some important and decisive conclusions that can be drawn from the above include the following:

Nonetheless, the country’s energy policy (underpinned by the insufficient and skewed liberalisation of the energy market, which has maintained PPC as the key player in the electricity system, with a 64% share in generation and a 98% share in supply) seems to turn a blind eye to the inevitable reality of the upcoming transition to the post-lignite era. Consistently supported by successive governments, instead of acknowledging the new facts and bracing itself for change in time, PPC would always ask for extensions and/or exemptions from the requirement that its lignite-fired plants comply with the ever stricter European standards. Suffice it to mention that PPC executives, who made up the majority of the Greek delegation to the EU working groups within the context of the “Seville process” for the review of the Industrial Emissions Directive, put pressure for the adoption of the most lenient possible limits.

In contrast to the requirements and against the trends of our times towards reducing investment in fossil fuels, with full support by every Greek government, PPC has done its outmost to secure the perpetuation of lignite use: it has expressed its wish to extend the operation of its old lignite-fired plants and has publicized its plans to build two new lignite-fired plants, Ptolemaida V (660MW capacity) and Meliti II (450MW capacity). The licensing procedure for the former has recently been completed and its construction is about to begin, with funding from the German investment bank KfW. Perhaps the most worrying development is PPC’s public appeal to the government to secure an exemption for the Greek electricity sector from the EU obligation to purchase emission rights under the European Emissions Trading Scheme.

The cost-efficiency of the construction of new lignite-fired plants has been the subject of a recent technical-economic study conducted by WWF Greece (“Ptolemaida V and Meliti II – Financial Feasibility Report for the New Lignite-Fired Plants”, 2013). The report concludes that, even without considering the externalities for society and the environment, the internal rate of return (IRR) is negative in the event that both plants are built and only marginally desirable in the event that one of them is built.