Impact of Lignite on public health

Pollutant emissions from power generation plants, as well as from lignite extraction and transportation from mines to plants, cause significant air pollution problems in the region, most importantly high ΡΜ10 concentrations. According to data from the Environmental Centre of the Region of Western Macedonia, in 2010, at 9 out of the 15 measuring stations in the Prefectures of Kozani and Florina, the European limit values were exceeded by more than 20%. 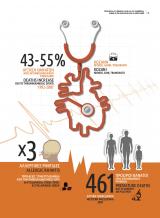 With regard to public health, although the lignite-fired plants and the lignite mines have operated for over 60 years, it is striking that no epidemiological study has been conducted on their impact on the health status of the inhabitants of lignite mining regions. However, according to a study conducted by AHEPA University Hospital, Thessaloniki, in three villages in the Prefecture of Kozani, deaths from thromboembolic events in the period 1992-2007 rose from 43% to 55%. A study conducted by Bodosakio Hospital, Ptolemaida, found that the inhabitants of Ptolemaida were three times as likely to suffer from allergic rhinitis as the average Greek. Moreover, the Greek branch of Greenpeace conducted an analysis of data and methodologies employed by the European Environment Agency and estimated that ambient air pollution due to the operation of lignite-fired plants in Western Macedonia led to 461 premature deaths in 2009.